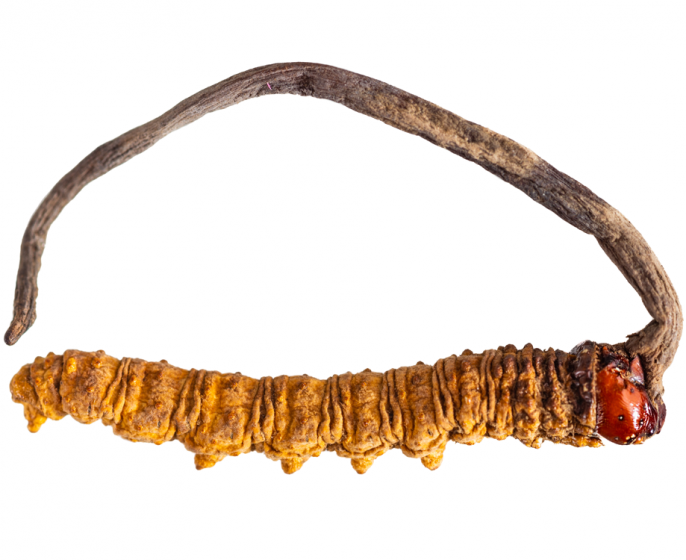 When you want to use food and natural supplements to increase your health, the Ophiocordyceps sinensis mushroom is a popular choice. it's been used in traditional Chinese medicine for hundreds of years, and scientists are now taking a closer look at the effects of cordycepin in animal studies.

Grow your own edible and medicinal Cordyceps Sinensis mushrooms with liquid culture syringes!

What Are Cordyceps Mushrooms?

Cordyceps Sinensis is a fungus that grows on insects found in the mountainous regions of Nepal and Tibet. Traditional healers would recommend it as a tonic for all illnesses, claiming that it improves energy, appetite, stamina, libido, endurance, and sleep. It is a superfood that is increasingly being studied for its medicinal benefits.

The cordyceps mushrooms consist of 400 types of fungi that feed on insect larvae. The fruiting body is used to make a supplement. The effects and benefits of Cordyceps are not fully known, but the research is promising -- which is why there are ongoing placebo control trials on their effectiveness and side effects.

Although the Food and Drug Administration has yet to endorse cordyceps in supplement form, you may want to know more about the potential health benefits of this unusual mushroom.

The potential benefits of Cordyceps include:

The pharmacological activity of Cordyceps Sinensis has been studied for decades. In one study, survival rates after infection by a virus that causes pneumonia increased when test subjects were given 3 grams of cordycepin daily over ten days, compared to placebo. Another study found that taking C. Sinensis supplements increased platelet, neutrophil, and lymphocyte counts in healthy individuals and those with chronic kidney disease.

The effects of Cordyceps on patients undergoing chemotherapy is that taking cordycepin-enriched C. Sinensis extract can help to protect white blood cells from radiation damage.

Many people enjoy hiking, mountain climbing, running, or other endurance activities as a hobby. However, maintaining an active lifestyle can be difficult for those with asthma or another condition that limits their ability to exercise.

Elderly individuals with chronic lung disease, daily supplementation with 3 grams of cordyceps extract helped decrease the time it took for study subjects to walk a certain distance. This suggests that Cordyceps Sinensis supplements may positively affect the endurance and stamina of individuals who suffer from respiratory illnesses.

A review of the literature on Cordyceps Sinensis found that it may benefit multiple organ systems. Cordycepin-enriched C. Sinensis supplementation in healthy individuals suggests that it may decrease fatigue, increase immune system activity, and protect against free radicals associated with cell damage — all of which could support good health.

More research is needed to determine the effects of Cordyceps Sinensis supplementation in individuals who are already sick or have a chronic condition. If you're interested in starting a cordyceps regimen, consult your doctor.

Cordyceps Sinensis is a medicinal mushroom that has been shown to have many benefits — including improving the immune system, increasing stamina and endurance, and possibly even supporting overall health. Although additional research is needed to confirm some of its benefits, Cordyceps Sinensis supplements may be worth trying if you suffer from an illness or want to improve your overall health.

So to recap, cordyceps sinensis mushrooms have the potential to be:

Cordycep Sinensis is parasitic in nature with the base of the mushroom originating from an insect larvae which it uses as its host. It grows in a long cylindrical shape with a club-like cap and is dark brown to black in color. It grows in comparatively low temperatures, below 69 degrees Fahrenheit and is slow growing. It can be cultivated using a brown rice medium or various agar mixes and should be exposed to light. To maintain the medicinal benefits however, it is suggested to have some sort of insect otherwise the mushroom will be mostly starch. You could try putting different moth larvae in your mix.