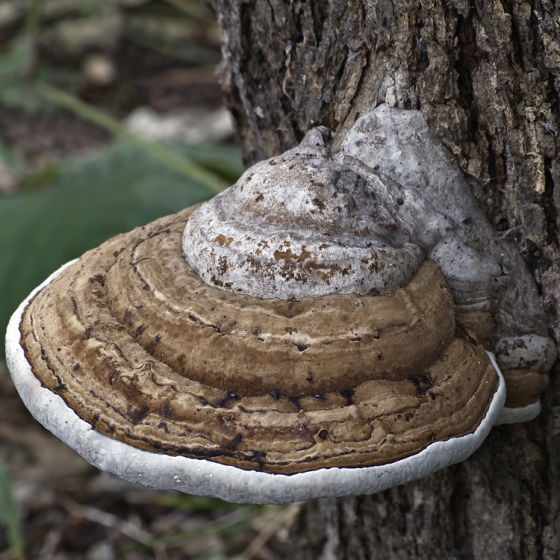 Grow your own edible and medicinal Artists Conk mushrooms with liquid culture syringes!

Ganoderma applanatum, commonly referred to as artists conk is one of the most adaptive species in terms of the different types of trees it can grow on. It is found all across the United States and Canada and can mostly be found at any time of the year. It is the cousin of the more widely known Reishi mushroom, which has gained popularity for its medicinal properties in the recent years. Like it's cousin, it also has been shown to have many medicinal benefits. Christopher Hobbs, author of “Medicinal Mushrooms” has stated that it is effective in treating respiratory infections.

Ganoderma applanatum is a polypore perennial and has a brownish, woody appearance on top with white spores spores underneath and causes white rot in the wood. When you scratch the white spores of the fruiting body, you expose the brown hyphae. Skilled artists will use these to make pictures with, hence this mushroom’s common name, the artist’s conk.

Because it is a perennial fungus, it can keep growing from year to year. Foragers can determine the age of this bracket fungus by cutting it open and counting the number of pore surface layers.

Like other bracket fungi, these mushrooms are found on tree trunks or at the base of trees in forests. They can grow alone or in groups and have a large cap that grows in furrowed zones that are brown to grey-brown in color.

Although it is not considered an edible mushroom because of its toughness, this fungi can still be used in food when dried and ground. It is commonly used as an additive in Asian cuisine because of its protein and rich mushroom flavor.

Artist's conk has a rich fungal aroma but unfortunately, even the young ones are typically too woody and bitter to eat. They can be made into tinctures or medicinal teas instead to reap the benefits. They can be grown using mushroom plugs to inoculate a log that has recently been cut or fallen down. They will grow on a variety of trees including beech, poplar, alder, apple, elm, buckeye and horse chestnut, maple, oak, walnut, willow, western hemlock or douglas fir among a few others.