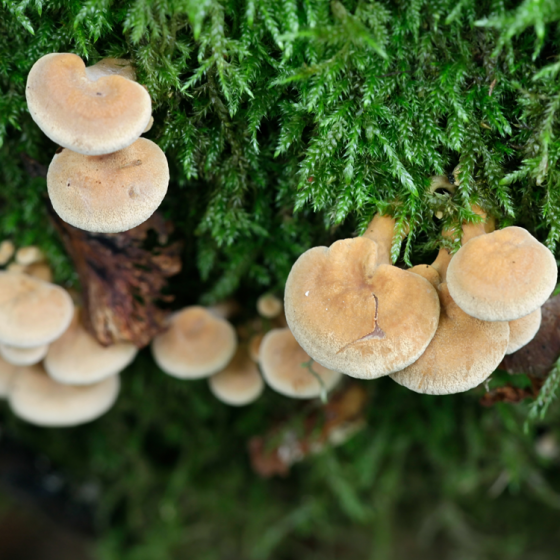 Grow your own panellus bio-luminescent mushrooms with liquid culture syringes!
Caution, these mushrooms are toxic and should not be eaten!

Panellus stipticus is native to Asia, Australia, Europe and North America.
Although it is not edible, it is being studied for its potential in bioremediation of
land that is contaminated and in converting industrial waste. A study using liquid
cultures of mycelia has shown reduction in the amount of toxic polyphenols in
waste water produced by olive-processing plants by 42% after 31 days. In
traditional Chinese medicine, the fruiting bodies have been used as a violent
purgative and to staunch bleeding.

Bio-luminescent panellus grows in clusters on logs, stumps and trunks of
deciduous trees such as oak, birch, maple and hickory. It grows in a fan like
shape up to 3 cm wide. It starts out as a tiny white knob, darkening to an orange,
yellow or brownish colored cap attached to the wood by a short stalk. The
bioluminescent part is mostly only at the ridges of the gills but does vary
depending what kind of wood it is growing on. It causes white rot by releasing
enzymes that break down the lignin in the wood. These enzymes are being
studied for their use in bioremediation.

These fungi also contain hyphal cells, which do not produce spores and are structurally different from the spore-bearing cells. Instead, they are cylindrical and spindle-shaped. Other microscopic features of Panellus stipticus include:

The fruit bodies of Panellus stipticus first appear as small knobs that later grow horizontally. After one month, these knobs develop into brownish caps. These caps are usually attached to wood logs by short stalks.

Panellus stipticus fungi are bioluminescent, meaning the mycelia produce light due to enzyme action. These mushrooms in particular do not put off as much luminosity as fireflies, for example, but they are still quite a sight to see. The amount of glow produced by these fungi depends on the contaminants available in the soil.

According to research, the luminosity in Panellus stipticus is an inherited trait that may be missing due to mutation.

OutGrow® is proud to present a full line of edible and medicinal mushroom
cultures. Economically priced so that everyone can enjoy the wonderful hobby
and benefits of mushroom cultivation. Our cultures are made by experts and are
100% clean and viable.

RECENTLY VIEWED
Reviews 1
Write Your Own Review
Only registered users can write reviews. Please, Sign in or create an account
* Once your review is approved you will recieve your Out-Grow coins in your account. You can review your coin balance under your "My Account" page.
To Top