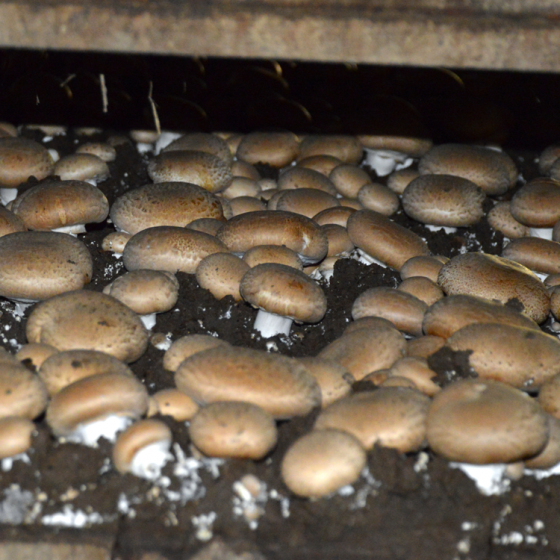 Grow your own edible and medicinal portobello mushrooms with liquid culture syringes!

Agaricus bisporus, more commonly known as portobello mushroom or the common mushroom, is native to the grasslands of Europe and North America. When immature, Agaricus bisporus is the small button mushroom that we commonly see in stores. It can either be white or brown when immature and is known as the portobello when mature. One of the most widely consumed mushrooms, it is cultivated in more than seventy countries worldwide. It is rich in nutrients, containing B vitamins such as riboflavin, niacin and pantothenic acid, as well as phosphorus, potassium, copper, selenium and proteins. With its high nutritional value, there are many health benefits to consuming Agaricus bisporus.

Agaricus bisporus’ cap grows in a hemispherical shape until it flattens out at maturity. It is 5-10cm in diameter with either a white or brown colored cap. It can be grown on a mix of compost and manure and needs to be kept in the dark. It likes a lot of humidity but should not be directly sprayed on.

Agaricus bisporus is an edible mushroom originally grown in North America and Europe and commercially grown in over 70 countries worldwide. It’s known as white mushroom or Swiss brown mushroom when immature. When it's fully grown and ready for harvest, the mushroom develops a brown cap measuring 5-10 centimeters. Mushroom growers in different parts of the world sell it under different names, but Portobello mushroom is the most common name.

How to Identify Agaricus bisporus

There are many ways to identify an Agaricus bisporus. The following are core qualities that define a genuine Portobello mushroom.

How to Grow Agaricus bisporus

The mushroom mycelium growth method varies from the methods used to grow other mushrooms. As a secondary decomposer, the raw materials of Agaricus bisporus have to be broken down by fungi and bacteria to initiate growth. The process of breaking down Agaricus raw materials is known as composting. These mushrooms are grown commercially around the world, though the best growers are in the United States.

Tips on Cooking This Mushroom

After harvesting your fresh mushrooms, you can mix them with many dishes. You can sauté them and mix them into pasta. You can prepare pizza mushrooms, curried mushrooms, white wine and garlic Agaricus bisporus, mushroom marinara ravioli, stuffed mushrooms, and more.